The Michael System is a powerful yet easy-to-learn map of human consciousness. In the core teachings you learn about the seven major personality types, called Roles. (Seven Soul Types)

Sometimes people can tell which of the seven major Roles they are through reading some of the Michael books and then doing self-inquiry; however, if you’re like most of us, you’ll probably feel like “all” of the Roles from time to time. If there’s any question about which Role you are, you can ask a Michael trainer to do this for you, either in person or by sending him or her some photos of yourself.


If you’d like Emily Baumbach to do your  overleaves for you, click here for more information. Darn, she is no longer doing them. 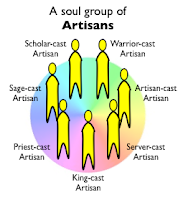 True Work / Life Task: Learning how to do sacred service; learning to become a healer. This comes from your North Node in the 6th House.

True Play: Playing with communication, sharing ideas, speaking, reading, writing, exploring the world with curiosity, perhaps with a spicy irony and humor. This comes from your North Node in Gemini.

True Rest: Resting at home surrounded by good food and comfortable furniture; also, resting by a quiet lake, river, creek or waterfall. This comes from your Jupiter in Cancer.

True Study: The study of philosophy, higher consciousness, meaning, archetypes, religious beliefs and the mind. Part of your True Study involves personal research on how religious and mundane beliefs get formed by personal experiences and unconscious drives. This True Study comes from your Moon in Sagittarius in the 12th House.


The Artisan is one of the seven soul types or roles in essence. Artisans have a natural talent for creative expression, bringing to life new and original ideas.


Those undergoing the fourth stage of reincarnation are known as mature souls. At this stage, life is about embracing otherness — other perspectives, other people, other cultures, other parts of one’s own being.

Appearance: MERCURIAL (Artisan): Named after Mercury (Hermes), in mythology the messenger god. Vulcan was the "smith" of the pantheon. This Bodytype corresponds to the Artisan Role. It is usually lean and short, as Mercury was said to be agile without being muscular. The body is energetic but is not geared for physical activity so much as for mental activity — the creation and conveyance of ideas and words. They have a low pain threshold and a tendency to hypochondria. Mercurial: witty, quick, wiry; good for lifetimes dealing with expression one on one (relates to Artisan) MERCURIAL (Mata Hari) Ideal type for Sages. Physical Characteristics: Bright, clean appearance. Usually dark. Hair and eyes often dark, but less body hair than Venusians. Classically slender and quick moving (e.g., the messenger Hermes). Skin is darker than average, and unblemished. The limbs are long, slender, and agile‑looking. The Mercurial voice is often deep or resonant. This type will retain its youthful appearance.

Nature (Character & Behavior): SOLAR (Priest): Named after the Sun (Sol, Helios). This Bodytype corresponds to the Priest Role. The body is medium to tall in height, and slight of build, perhaps even fragile in appearance. The hands and feet are also long and thin. This type is not built to withstand the rigors of physical activity, but their presence is distinctive and impressive, with a tendency to wide shoulders. The features are refined and delicate, and have a youthful appearance. The forehead is broad. Solar: bright, spirited, small and frail; good for lifetimes needing to be in the center of everything. (relates to Scholar)

Health (Gland): VENUSIAN (Sage): Named after Venus (Aphrodite), the goddess of love and fertility. This Bodytype corresponds to the Sage Role. Consequently this is a beautiful or handsome body. I don't just mean OK to look upon. I mean it is very pleasant to look upon, whether male or female. The skin is clear of blemishes, the hair is bountiful and lush, the features are attractive to the point of being distinguished, the body is well proportioned, tending to no extreme or irregularities. Venusian: soft, sensual, warm, charismatic; good for lifetimes dealing with being open, approachable, and accessible to larger groups (relates to King)

SCORPIO Mature Cycle: favorite sign of Mature souls because this cycle is a time of psychological exploration and self-awareness; capable of giving to others in intimate relationships in ways not possible before; can form satisfying love relationships; emergence of the deeper, sensitive, intuitive side of Scorpio
Artisans usually have charts strong in water and fire, the creative elements.