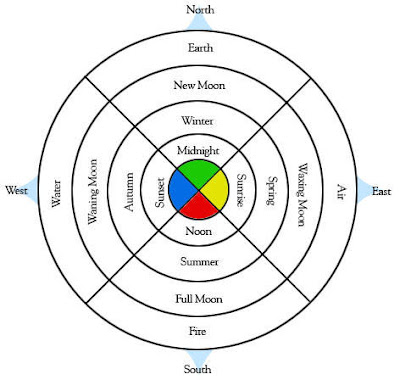 The Hermetic Order of the Golden Dawn codified some of these correspondences in the 19th century. Most notable here are the cardinal directions. The Golden Dawn originated in England, and the directional/elemental correspondences reflect a European perspective. To the south are the warmer climates, and thus is associated with fire. The Atlantic ocean lies to the west. The north is cold and formidable, a land of earth but sometimes not a lot else. Occultists practicing in America or elsewhere sometimes do not find these correspondences to work.
http://altreligion.about.com/od/westernocculttradition/ig/Elemental-Symbols/Elemental-Correspondences.htm

In classical thought, the four elements Earth, Water, Air, and Fire frequently occur; sometimes including a fifth element or quintessence (after "quint" meaning "fifth") called Aether in ancient Greece and India. The concept of the five elements formed a basis of analysis in both Hinduismand Buddhism. In Hinduism, particularly in an esoteric context, the four states-of-matter describe matter, and a fifth element describes that which was beyond the material world. Similar lists existed in ancient China and Japan.

According to Aristotle in his On Generation and Corruption:
According to Galen, these elements were used by Hippocrates in describing the human body with an association with the four humours: yellow bile (fire), black bile (earth), blood (air), and phlegm (water).

The Chinese had a somewhat different series of elements, namely Fire, Earth, Water, Metal and Wood, which were understood as different types of energy in a state of constant interaction and flux with one another, rather than the Western notion of different kinds of material.
In Taoism there is a similar system of elements, which includes metal and wood, but excludes air, which is replaced with qi, which is a force or energy rather than an element. In Chinese philosophy the universe consists of heaven and earth, heaven being made of qi and earth being made of the five elements (in the Chinese view, the attributes and properties of the Western and Indian Air element are equivalent to that of Wood[citation needed], where the element of Ether is often seen as a correspondent to Metal[citation needed]).

The five major planetsare associated with and named after the elements: Venus 金星 is Metal (金), Jupiter 木星 is Wood (木), Mercury 水星 is Water (水), Mars 火星 is Fire (火), and Saturn 土星 is Earth (土). Additionally, the Moon represents Yin (陰), and the Sun 太陽 represents Yang (陽). Yin, Yang, and the five elements are recurring themes in the I Ching, the oldest of Chinese classical texts which describes an ancient system of cosmology and philosophy. The five elements also play an important part in Chinese astrology and the Chinese form of geomancy known asFeng shui

Email ThisBlogThis!Share to TwitterShare to FacebookShare to Pinterest
Labels: Elements