What Type are the Olsen Twins?


Spoiler Alert! The video shows Carol typing Mary Kate as a Type 4 and Ashley as a Type 2.They do acknowledge they probably have a secondary 1... They also miscategorize them as identical.

Another twin makeover: Identical twins that are not identical.  Another set they rate as a 2 and a 4.

Note:
"Despite being very similar in appearance, they [Mary Kate and Ashley] are not identical, but fraternal twins."[2][3] wikipedia

Ashley says in video on Ellen (below) that they are mirror twins.

Here are a few still of the twins to compare: 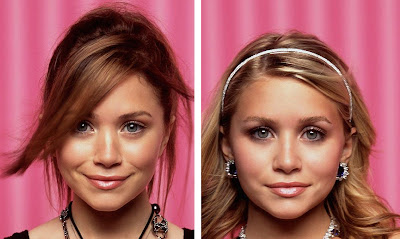 "Mary-Kate has darker hair, used to have an eating disorder, and has more ... her hair brown (mary kate) and one wears her hair blonde Ashley." "2006 when Mary-Kate opted for a darker hair color while Ashley remained blonde."  "Ashley has the blonder hair and Mary-Kate is the one with the darker hair." "Mary Kate Olsen has the darker hair then Ashley Olsen"  "Mary-Kate wore a slinky, silky purple dress and had darker hair"

But I also read "Ashley is 2 inches taller, right handed, darker hair, and loves to dance."

Sources are contradictory about which twin is taller:
Ashley is Taller than Marykate, Ashley is 5ft 1, and Marykate is 5foot 0
Ashley Olsen is older than Mary-Kate by two minutes. Ashley and Mary-Kate Olsen are not identical twins.   Ashley is an inch shorter than Mary-Kate, and has a freckle above her lip. She is also right-handed, while Mary-Kate is a lefty.

- MK’s chin resembles a square, whereas Ashley’s face is much more round.
- Due to her smoking, MK’s face is also a lot more ‘aged’ than Ashley’s.
- MK experiments alot more with her style, and usually wears more ‘edgy’ clothes.
- If you look at older photos, Ashley has always had blonde hair (apart from briefly, she had brunette) whereas MK has had a variety of different colours.

If I had not heard the DYT assessment of their type, I would have said that Mary Kate is a T1/3 (warm spring or maybe clear spring 1/4) and ashely is a T1/2 (light spring).  They both have a heart shape chin of the T1, Ashley's face is also round like T1.  Mary Kate's face is actually more angular than Ashley's, so I don't see T4 in it.

Read seasonal color analysis and the twins, you generally see them analyzed as soft autumn (3/2). 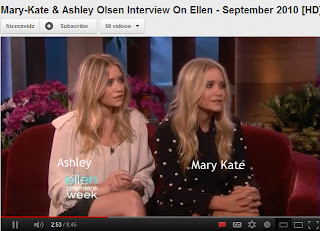 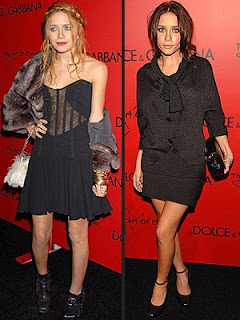 P.S. Mary-Kate and Ashley Olsen walked the red carpet last night for the Dolce & Gabbana charity event hosted by Penelope Cruz, and we couldn’t help but notice how drastically opposite these two are becoming and this time, it’s not just the hair. Mary-Kate kept up her rock and roll vibe with heavy black ankle boots, but went for more of an undone sexy look a la Kate Moss. Ashley opted for a more polished look, with a buttoned-up frock and super high Balenciaga platform pumps. 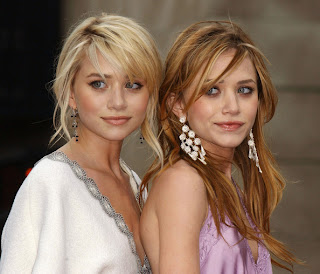