The Four Temperaments or Humors

"The sanguine temperament is fundamentally impulsive and pleasure-seeking; sanguine people are sociable and charismatic. They tend to enjoy social gatherings, making new friends and tend to be boisterous. They are usually quite creative and often daydream. However, some alone time is crucial for those of this temperament. Sanguine can also mean sensitive, compassionate and romantic. Sanguine personalities generally struggle with following tasks all the way through, are chronically late, and tend to be forgetful and sometimes a little sarcastic. Often, when they pursue a new hobby, they lose interest as soon as it ceases to be engaging or fun. They are very much people persons. They are talkative and not shy. Sanguines generally have an almost shameless nature, certain that what they are doing is right. They have no lack of confidence." wikipedia

Sanguine (Air): Since the Sanguine temperament is basically the most equable and balanced of all, it's not surprising that the Sanguine facial types are also quite balanced, aesthetic and pleasing. The basic shape of the face and head is oval, or egg-shaped, with a tapering, delicate chin, mouth and lips. The eyes tend to be brown, limpid and almond shaped, quite beautiful in appearance; the rest of the facial features are pleasing and well-proportioned.. The hair is usually brown or chestnut colored, luxuriant and wavy. Dimples are common, and the neck tends to be long and elegant. This basic facial type is called Venusian, and is often associated with the sign Libra. 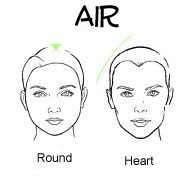 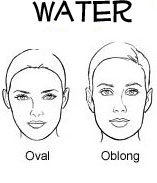 "The phlegmatic temperament is fundamentally relaxed and quiet, ranging from warmly attentive to lazily sluggish. Phlegmatics tend to be content with themselves and are kind. They are accepting and affectionate. They may be receptive and shy and often prefer stability to uncertainty and change. They are consistent, relaxed, calm, rational, curious, and observant, qualities that make them good administrators. They can also be passive-aggressive." wikipedia

Phlegmatic (Water): The basic shape of the Phlegmatic face and its features is round. The eyes are large, watery and limpid, often blue or gray in color, with thick, luxuriant lashes. The cheeks are full, and may be dimpled. There is usually a small pug nose or button-shaped nose. The chin will be rounded, not prominent, and may even be receding; double chins are common, especially with weight gain. The head and facial hair are usually light, and eyebrows wispy. The hairline is often high, and the forehead prominent.

The round Phlegmatic face is most closely associated with the sign of Cancer, and, to a lesser extent, with Pisces. Scorpio, due to its classical Mars rulership, is a mixture of Phlegmatic and Choleric in its facial type.

"The choleric temperament is fundamentally ambitious and leader-like. They have a lot of aggression, energy, and/or passion, and try to instill it in others. They can dominate people of other temperaments, especially phlegmatic types. Many great charismatic military and political figures were choleric. They like to be in charge of everything. However, cholerics also tend to be either highly disorganized or highly organized. They do not have in-between setups, only one extreme to another. As well as being leader-like and assertive, cholerics also fall into deep and sudden depression. Essentially, they are very much prone to mood swings." wikipedia

Choleric (Fire): The most common basic facial shape is triangular, with a narrow forehead and a broad, angular jaw. A prominent, jutting chin can also be part of the picture, and often indicates being emotionally volatile , supercharged, or high strung. A pointed, prominent nose is also Choleric, and is a Martian sign, as are high, prominent cheekbones. Arched eyebrows and pointed, angular features are common. The facial complexion is often ruddy or reddish, or sometimes sallow.

"The melancholic temperament is fundamentally introverted and thoughtful. Melancholic people often were perceived as very (or overly) pondering and considerate, getting rather worried when they could not be on time for events. Melancholics can be highly creative in activities such as poetry and art - and can become preoccupied with the tragedy and cruelty in the world. Often they are perfectionists. They are self-reliant and independent; one negative part of being a melancholic is that they can get so involved in what they are doing they forget to think of others." wikipedia

Melancholic (Earth): The earth element's basic shape is a square; so, too, is the Melancholic face typically square or rectangular in shape. The balanced, well-nourished, earthy Melancholic individual will have a broad, solid, square face, with a well-developed bone structure; all the facial features will similarly be broad, squarish, and well-formed. The neck will be broad, stout and strong. This type is commonly associated with the sign Taurus.

NOT SURE I AGREE WITH THIS ONE!