Another MBTI and Temperament correlation

This is just one of many possible correlations, which is why I wrote a post on how this is a rabbit hole. 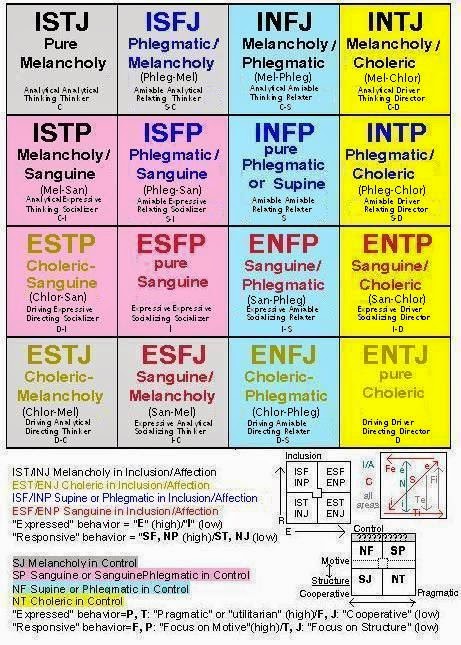 Eric B: I use the two-factor matrix to define the temperaments:
from the beginning, the behavior corresponding to both scales was noted in the temperaments.
The sanguine temperament showed quick, impulsive and relatively brief reactions. (i.e. short delay, short sustain)
The choleric temperament manifested a short response time-delay, but the response was sustained for a relatively long time.
The melancholic temperament (renamed "Melancholy") exhibited a long response time-delay, and the response was sustained at length, if not, seemingly, permanently. The Phlegmatic was anciently acknowledged as characterized by a longer response-delay, but the response was also short-lived
(Evidence-based Research in Complementary and Alternative Medicine I: History Francesco Chiappelli, Paolo Prolo and Olivia S. Cajulis)
Response delay, which determines the speed with which one acts, became Introversion/Extraversion (short=E/long=I)
Response sustain, which ends up determining how "critical" or "friendly" a person is, was the forerunner of People/task orientation, and later split further into Eysenck/FFM "Neuroticism". (short="people-oriented" or "stable"/long="task-oriented or "unstable").
In the MBTI 16 types, two temperament matrices have actually been carved out from the letter groups. The Interaction Styles of Linda Berens are more like the old temperaments, using E/I and "directing/informing" (which basically maps to ST or NJ vs SF or NP).
Then, there are Keirsey's "temperaments", which are more familiar. I have deduced that "response delay" in this matrix is "cooperative/pragmatic", and "response-sustain" is a "cross-factor" of sorts, also discovered by Berens: Structure vs Motive, which pairs SJ with NT, and SP with NF, respectively. Keirsey's matrix was actually C/Prg with MBTI S/N, but S/N did not fit either delay or sustain. Perception had been added as a temperament factor by Kant, which paired the Sanguine with the Melancholy and Phlegmatic with Choleric, allofwhich had formerly been opposites.
In this comparison, it is agreed (with Keirsey) that SP is Sanguine, and SJ is Melancholic. It is NF and NT that are reversed. Keirsey made NF "choleric" because of its"enthusiasm", and NT "phlegmatic" because of it's "coolness". But using the old delay/sustain matrix suggests the reverse, evidenced by the NF's "diplomatic" skills set, and the NT's "strategic" skills set.
Since other grouoings, the Interaction Styles, also correspond to the temperaments (Chart the Course-IST/INJ-Melancholic; In Charge-EST/ENJ-Choleric; Get Things Going-ESF/ENP-Sanguine; Behind the Scenes-ISF/INP-Phlegmatic), then those are what we look for with the classic temperament "social behaviors". (Choleric being enthusiastic, Phlegmatic being "cool"). The Keirseyan temperament groupings ("called "conative" by Berens, meaning about "action"), the Phlegmatic's "calmness" would be represented by the NF's desire for peace. The Choleric "enthusiasm" (which is about power) would basically translate into the NT's desire for "mastery and competence". Actually, Kant had said both Choleric and Phlegmatic were "cold-blooded", but they were cold in different ways.
Then, there are some, following the suggestion above, who make SJ Phlegmatic and NF Melancholic. But the NF is not particularly "sad", and the SJ, not particularly "calm" either. The SJ's need for order and familiarity is classic Melancholic, however.
This way, you end up with the following, which do fit the descriptions of those who use "temperament blends":
ISTJ Pure Melancholy
ISFJ Phlegmatic/Melancholy ("PhlegMel")
INFJ Melancholy/Phlegmatic ("MelPhleg")
INTJ Melancholy/Choleric ("MelChlor")
ISTP Melancholy/Sanguine ("MelSan")
ISFP Phlegmatic/Sanguine ("PhlegSan")
INFP Pure Phlegmatic
INTP Phlegmatic/Choleric ("PhlegChlor")
ESTP Choleric/Sanguine ("ChlorSan")
ESFP Pure Sanguine
ENFP Sanguine/Phlegmatic ("SanPhleg")
ENTP Sanguine/Choleric ("SanChlor")
ESTJ Choleric/Melancholy ("ChlorMel")
ESFJ Sanguine/Melancholy ("SanMel")
ENFJ Choleric/Phlegmatic ("ChlorPhleg")
ENTJ Pure Choleric
Here are sites using these blends: http://www.selfgrowth.com/articles/Warfield2.html http://fourtemperaments.com/Description2.htm
... but hey, don't listen to me or anyone, EXPRESS YOUR TRUTH! Jane
Leave comments for Jane Leu Rekas

I love reading your blog. I have been through three of the DYT courses, types 1,2 and 3. I am now thinking I am a 4. I am simultaneously frustrated and addicted to DYT. I am interested in this particular post because it adds even more confusion to my self-analysis. Many years ago I was identified as INFP. I have been dressing as a Type 2 for the last eight months and feel miserably somber and mousy! And I believe the color palette ages me ten years not to mention how uncomfortable I feel in the draped, flowy shapes. I can't do it one more day. So I went back to Carol Tuttle's books and I think I may be a 4. As a child, I had a lot of Type 1 energy but I am definitely not a 1. I was color draped as a winter. Have you seen the recent video on thecarolblog.com re: 4/1 combos that come off as Type 2? Can you recommend any of your materials to purchase that may help me out?

I'm working on a document on incorporating Secondaries. I will get back to you soon. :)