Tues. (from )
This has been an intense past few days.  On Sunday, we went to the in Sedona.  The sermon was given by Dr. Michael Mirdad, who has a doctorate in metaphysics.  I want one of those.  I want to live the way he outlines.  I want to see heaven here on earth.
I am currently sitting in in a resort of the kind I have never experienced before, due to growing up poor.  This doesn’t interest me.  It gives me a bit of a feeling of being a princess, but that fades and I realize I am more grateful for the suffering I have experienced in my life as it has motivated me to grow more than this kind of indulgence ever would have.
In , where we live, Greg and I have not been able to find a church that suited us both.  We have now found it, but it’s in Sedona.  We are both drawn to move t/here.  What was amazing to me was it was a new thought, forward thinking, new age church, WITH Christ Consciousness.  It’s called Unity church because they believe there is no separation between us and God, between us and one another.  We are all one.
I was afraid that would mean they wouldn’t speak of Jesus, but it didn’t.  He was God walking among us.  He was also a man realizing he was not separate from God and living his life in accordance.  He modeled heaven on earth.  We have all forgotten.
I could tell right away that Michael was influenced by A Course in Miracles.  ACIM is what I call Buddhism for Christians, or Christianity for Buddhists.  It’s about realizing that this plane of existence is like a bad dream, once from which we can awaken.
I could be so happy here (Sedona, not Phoenix).  But if that’s true, I can be happy anywhere, and I must not forget that.  I cried in church because I felt so welcomed, but also because I felt home in my soul.
The next day, while killing time before we went to get new tattoos, we went to a trail to do a little walking.  I headed back to a bench near the car to read before Greg was ready to.  Later, a couple ran past me and then Greg said “look.”  It was Michael (the pastor) and his partner.  Greg had a chance to thank him for his sermon.  It was another example of the synchronicity of Sedona and our life we are opening up to.
Earlier we also went to a 7:30 a.m. A.A. meeting.  The topic was acceptance of others and loving others.  A woman talked about reconciling with her brother.  I had been dreaming the prior few days of my brother, mother and grandmother, with lots of unresolved anger I didn’t realize was still there.  But at the meeting, I only felt a wistful sadness. 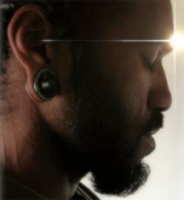 We got tattoos from SIVA of Sacred Fire tattoos in Sedona.  Greg got an image of a chef’s knife and sharpening blade in front of flames and I got a dragonfly.  Over the experience of our trip, the meaning of theses images deepened for us.
Interruption:  I was just written by someone that has used DYT that I wrote about earlier on my blog.  I was asked to remove a post about them, which I have done.  It’s just one more thing that makes me wonder about so much.  Wonder is not the right word, but I’m waiting to calm down.  For some reason, I’m not popular with other DYT fans.  Well, that’s obvious: the reason is I’m critical.  Ironically, ultimately I support the system and defend it at times.  I honestly don’t know why I don’t just walk away.
Today I lost my phone.  Monday I realized I left my phone charger behind at the former hotel we were at.  The internet is down today at the resort.  Something is telling me to stay off the grid.  I’m actually writing this in Word right now.
Where was I?  Back to the tattoos, because they are awesome and meaningful, and everything since has been a negative distraction:  Greg’s is not only about his career as a chef, but I told him that with the fire in the design, it is somehow alchemical.  Also, Michael Mirdad talked about how the symbol for earth in astrology is an x over a circle, and that x also represents the four elements of life in the material world which we have to overcome in our human lives.  The knife and the sharpening wand form an x in Greg’s tattoo, and therefore could also represent the obstacles in his own life he has overcome and transmuting, as one also does in the act of cooking; And my tattoo, is a dragonfly, which is a symbol of wind and water, the flight up from the subconscious, the symbol of dreams, which relates to my recent interest in learning about hypnotherapy.
Wed.
Day 2 of Greg’s conference and we go home tonight, but I’m ready now.  I don’t like that feeling, so I’m trying to sit on the balcony and settle a little more into this moment.  This resort has 580 rooms.  Mostly I notice how many people service the complex.  A man is currently working on the pool below me.  It looks like a boring and thankless job.  As it’s still morning, it’s still cool.  It didn’t get as hot I expected it might yesterday and it even rained.  Apparently has a monsoon season. 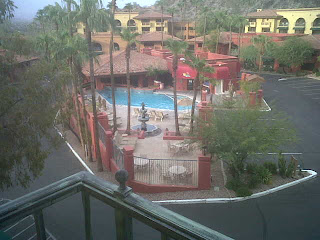 This resort is so big, there is a shuttle to take you from one end to the other, or down to the lobby, etc.  I really don’t like the classist nature of that or this place all that much.
A man just walked by in a business suit and a conference badge.  He might be a presenter.  My DH is not outfitted for business.  He’s dressed a little nicer than usual, but clearly from (now at least).  He’s the only R&D chef at Turtle Island Foods, but there are companies here that have 1000s of them in their departments.  I often wonder what his career future might hold.
Yesterday I went to the mall over lunch time with another wife here with her husband for the conference.  At first I was really afraid there would be a class divide, but there really wasn’t.  It turned out she was interested in the same metaphysical concepts that I am, and she said she didn’t know what she was going to do that day but asked the universe to manifest someone to spend time with.  She lamented that she was near 70, but didn’t seem it at all.
Now a man, in a suit and bow tie, just walked by.  Makes me think of a Joni Mitchell song (And a bar maid came by in fishnet stockings and a bow tie ...).  There’s still no wireless in the room, so I will have to go down to the lobby to post this.  I also don’t know what I’m going to do for my lunch today.
There’s a pigeon cooing in mild distress on the next balcony.  I should look up the significance of that.
I should go do something.  Maybe get a manicure.  I find those kind of odd.  I only started ever getting them, off an on, since I got married.  Well, I got acrylics done before that a few times, but could never keep up the maintenance.  Again, it seems like a class issue. But is that all there is to it?  Do I not feel worthy?  When does frugal become cheap, or worse, self-neglect?
Being here in and doing nothing but sitting at this resort reminds me of when I went to and only later realized I missed the Van Gogh museum.  Or when I was on layover in but didn’t leave the airport to see the architecture because  I was too shy to get a taxi.
Send me an email: janerekas@hotmail.com Jane Rekas, LCSW

i really love these posts. there is so much more than other places, and i like your thoughts, and how they flow. you seem very peaceful right now...rather, full of thought, but in an inward and reflective place that is very still. that church sounds really wonderful, and i'm glad you all have found a spiritual group with whom you resonate. it really does seem as though your natural path is winding to Sedona. i have wanted to look into ACIM and am reminded of that now. my computer is a mess and i have been online rarely, or at least in very irregular intervals and for short periods of time. even with that, i have definitely missed you in EYT. i hope your trip back is wonderful, as well as your time with Taylore soon!