April 03, 2013
You may have noticed I changed the last line of every post. Don't listen to me, or anyone.  Be your own authority.  All of these typing systems are tools, not laws of divine order.  I wish they were, sadly.  One reason I pick them all apart is the hope that the science beneath them will satisfy me enough to make me a believer.  Yet, I am an eternal skeptic.  What a dilemma. Ultimately though I will always come back to using what is useful and discarding the aspects that are not.

If you're just comparing the seasonal color analysis systems, the flaws in some of them are the fact that it's nearly impossible to train yourself.  I suppose I'm attempting to do so and realizing how I've learned some things that are probably inaccurate.  For instance, it is so easy to look at the 12 seasons by hair and eye color, when skin is what predominates.  And if skin is what is most important, you simply cannot analyze anyone from photos, not with any justice.  But what's so annoying is many of us will never see an analyst face to face, because it's a dying specialty, it's not in our area or perhaps it's too expensive.

So we do what we can with what's available.  The many quizzes and the modified draping tricks.  But they all come up short... at least for me.  It drives me crazy to not have definitive answers.  But it also would probably drive me crazy to be limited I suppose - especially if it's wrong.  So I only accept the label given within any system as determined by that system, which I hold as possibly flawed.  Such as being Tone II according to IlluminEssensce.  I have a friend that was told she was Tone III, when I feel she is T1, and a woman who believes she is T2, was told she was Tone I.  That doesn't mean IE is wrong, it means that within that system I am Tone II, but I'm just not satisfied with that, and that's ok.  But I digress.

I'm incredibly intrigued with how personality does match up with appearance, overall... but I get frustrated when it's not perfect.  But how could something so complex really be crammed into the boxes of any simple system?  The exceptions to any pattern put forth by any system don't disprove the system, just it's simplicity. Ok, I'm giving myself a headache (well I already had one from allergies, but this doesn't help). 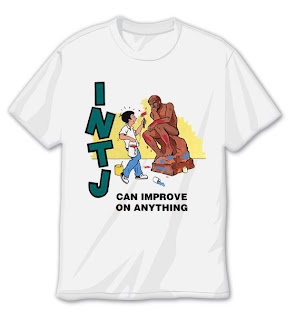 "People with the INTJ personality type are serious, analytical and perfectionistic. They look at a problem or idea from multiple perspectives and systematically analyze it with objective logic, discarding things that turn out to be problematic, and evolving their own understanding of something when new information turns out to be useful. There is no other personality type who does this as naturally as the INTJ." source

"The INTJ is a perfectionist and may also find it difficult when other people or projects etc do not come up to their high expectations and standards... INTJs are perfectionists, with a seemingly endless capacity for improving upon anything that takes their interest. What prevents them from becoming chronically bogged down in this pursuit of perfection is the pragmatism so characteristic of the type - INTJs apply (often ruthlessly) the single criterion ‘does it work?’ to everything from their own research efforts to the prevailing social norms. This in turn produces an unusual independence of mind, freeing the INTJ from the constraints of authority, convention, or sentiment for its own sake."  source

... but hey, don't listen to me or anyone, EXPRESS YOUR TRUTH! Jane
personal updates

Anne B said…
I have enjoyed lurking around your blog. I, too, have been on a quest to find the perfect outer expression of my inner self. I, too, have come to the conclusion that there is no perfect system of color analysis.

Right now, I am happy with Irenee Ritter's work and I like the CMAS color palette for Summer. I am training my eye to notice what looks good on me and then I try to match it to a system. So far, Irenee has the most correlations.

I think we INs are all on a quest for perfection. I am an INFP and a counselor to students with disabilities and challenges in learning.

But isn't it a fun journey? I am learning to relax and just enjoy my clothes and the creativity I get to express with them. Somedays I feel the outer and inner match; other days, not so much. Just part of the journey.