This woman had been typed as a "spring" based on the 4 seasons color theory and has been wearing that type of clothes and operating with that personality for many years. In the IlluminEssensce system - which does not use color, facial shapes or personality in the typing process - she is a Harmonic Tone II. Tone II does not directly map to any "season" but would be most closely associated with "summer". In this video we see that without adding any make-up and just by draping wrong sized clothes on her body to cover up what she is wearing with clothing that is "in her Essensce", her skin begins to glow, blood and life force energy begin to flow more clearly and smoothly to her face, and she loses 10 years or more according to audience feedback. Taylore comments how exhausting it has been for her to have all the sporadic energy on her body all the time - "spring" clothes - which does not match her the relaxed and flowing energy pattern that is congruent with Harmonic Tone II energy, i.e. more congruent with her innate way of being. 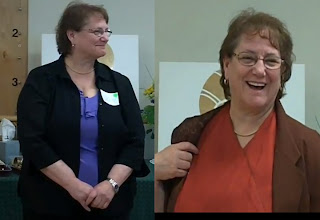 Black makes you look thinner right? Not necessarily so. In this video we cover up all the black with color radiances and shapes that are consistent with this woman's Harmonic Tone - making her look 20 pounds thinner according to audience feedback. Conventional fashion rules are transcended by the greater truths in the IlluminEssensce system. By harmonizing fashion and beauty items in support of one's life force energy, IlluminEssensce helps people look more beautiful - taller, thinner and younger; increases energy levels and overall health & wellbeing; and leads to significant shifts in personal relationships, career success and almost every aspect of peoples' lives. Supporting one's life force energy=good things happening all around. We also learn that Tone III women are constantly told to back off, quiet down, zip it, etc. - and that by dressing in their Essensce they can be their most powerful self and simultaneously be viewed by others as more friendly and approachable, and less intimidating. 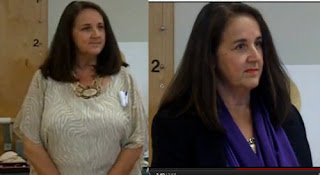 In this video we learn that many Tone IV women wear brown and in between colors to soften themselves and cover up their true nature, which others often make them wrong for. You might notice how sweet and soft this woman looks when she is wearing colors that might normally be considered harsh or bold. By dressing more firm, she is perceived as more soft. Because her outer appearance is congruent with her inner truth there is no contrast between the two. People perceive her as more friendly and approachable.
Leave comments for Jane Leu Rekas

Email ThisBlogThis!Share to TwitterShare to FacebookShare to Pinterest
Labels: IlluminEssensce, Taylore B. Sinclaire

I wouldn't say she looks "softer" afterwards, she looks stronger to me, but she does look better!