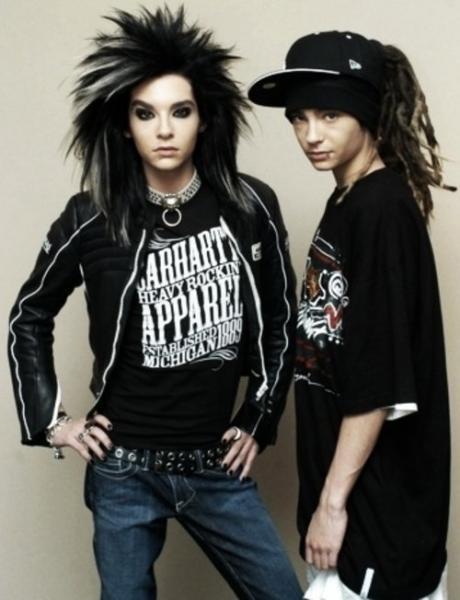 Bill and Tom Kaultiz of Tokio Hotel, are quadruple Virgos! They have Virgo Suns at the end of their 12th house, and Mars in Virgo rising, Moon is also in Virgo in 1st house but not close enough to ASC.  They also have a cardinal t-square.

Sun conjunct the Ascendant
"These people make a strong personal impression. Others tend to see them as confident people, or as leaders of some sort. This is because they project strength. Of course, this strong impression can rub some people the wrong way. These people are noticeable and very aware of how they come across to others.

Sun rising people tend to believe that they are in control of their destiny. They usually don't believe in fate, and they'll take any pessimistic comments that come their way as personal challenges. In fact, this concept extends to other areas of life--they prefer to lead rather than follow, and are usually most comfortable in situations where they have the freedom to do so. They identify strongly with the image they project, and they usually prefer to be viewed as capable individuals. Children with this aspect may appear to be older than their years.

If the Sun is in the 12th house and conjunct the Ascendant, the desire to lead and to be noticed is great, but there may be some teetering when it comes to actually expressing these desires. These people may be inclined to daydream a lot about being awe-inspiring leaders, or the center of attention, but there can be much self-consciousness and some reluctance to actually throw themselves into the spotlight. Over time, they might find ways to get the attention or the position of importance they crave in indirect and/or creative ways."

You can see that Tom is calmer and more confident seeming, but also willing to take the back seat to Bill being front man.  They clearly decided early that they wanted to be famous, but they also have a lot of ambivalence about the cost to their personal lives.
Mars Rising – sometimes hair is reddish or auburn. Pimples or scars on the face, may also have a ruddy complexion or sometimes a receding hair line prone to baldness.

Mars Rising tends to be assertive and likes to initiate plans and ideas, and they may also be highly competitive and challenging. Astrologer Sue Tompkins notes these people as having a vague feeling that conflict is about to break out at any minute, and that sometimes the person is born is born into a competitive environment or raised in an early atmosphere of conflict. Depending on sign and aspects these people tend to have a go-getting approach, and when Mars is sitting right on the ascendant this can sometimes represent early births.

Their parents divorced early, so there was an atmosphere of conflict.  They certainly are go-getters.


The combination of your Sun sign and your Moon sign shows that you are dominated and motivated by your intellectual interests. You are very loyal and sympathetic, but never very romantic. When you marry, it will be for intellectual affinity as much as anything else. A high sense of discrimination restricts you from getting involved with anyone with an inferior mind. You are very finicky in your tastes in matters of people, dress, food, and even household furnishings. This sense of discrimination keeps you pretty conventional. You have an innate dislike for anything radical or daring, keeping you and the object of your interests very much on the straight and narrow. You are very secure in your practicality. Flightiness, insincerity, and frivolity, heavy emotions or half-thought-out ideas have no place in your life. Since you think matters through so carefully, you are not likely to be gullible or easily convinced. You are a very socially oriented person. You believe in preserving the law and order, and when issues need changing, you want the improvements to occur in an orderly and gradual way, according to the rules of the game. The revolutionary spirit is not strong in your nature. Peace is so important to you. Nothing is worth fighting for except in a polite and well-bred way. While you are one to hold rigidly to your well conceived ideas, you have no difficulty fully understanding and appreciating the ideas of others. At times, this makes a firm and decisive course of action hard to plan and execute. When a direction is decided, your creations are marked by care and precision and a flawlessness that is amazing. You are the perfectionist, always placing many demands on yourself.

There are videos about who they have dated, very few women, and interviews in which they share that they have little time for it and avoid one night stands.  They certainly are both finicky about how they dress!

The twins are 4/6 Generators.  Bill has commented in videos that he wants a soul mate, that he recognizes that attraction from a distance won't work without getting to know the person first.

The twins have open throat centers:


Getting Attention
"Since the throat center is the center of metamorphosis and metamorphosis creates distinction, the throat center also regulates how visible we are in the world. Noise and movement, both key throat attributes, get you noticed (for good or bad).
For example, if you are looking for an animal in the forest you might not notice it until it moves. Or in the classroom the child who grows slower or faster than the other children is noticed. In terms of noise it is obvious that it gets attention. If you are sitting in a movie theatre full of people, the only person you'll really notice is the one who is talking. And there is a good chance that they have an open throat that is being pumped up by all the defined throats around them!
A defined throat is designed to get attention (good or bad) in their fixed way. An undefined throat is here to be flexible in how they get attention. Both need to follow their strategy. Only then will they get the attention that is correct.
People with open throats can become obsessed with attracting attention, just like people with defined throats can spend a lifetime trying to stay out of the way. This is a distortion of their natural talents. The moment you are conditioned by attracting attention is the moment you don’t see the possibilities on either side of the coin.
Open throats can attract attention but they can't control when or how. Defined throats can attract attention but it can be lots of the wrong attention if they don't act correctly."  http://www.humandesign.com/throat-center

Blogger said…
Get your personal numerologic report.
Begin the most interesting journey of your life and learn your ultimate life purpose.
March 31, 2017 at 5:57 AM