Twins fascinate me, and Tom and Bill Kaulitz of a German band, Tokio Hotel, are no exception.  What is most fascinating about them is that while they are identical, they dress extremely differently.  Tom dresses in a fairly masculine, Hip Hop style with dred locks, while Bill dresses in a very andrognynous Goth/Emo style, complete with black hair and eyeliner. Bill always seems a bit thinner, almost avoiding building muscle, which Tom doesn't shy away from.  This causes Bill's face to be somewhat more gaunt and feminine.  Tom also wears baggy clothes, while Bill wears his pants skin tight.

Since this pic, they rarely smile in pictures, though they smile a lot in interviews and videos.  They are definitely Disinhibited, but though you'd guess they are Outs, they could be Ins.  They have oval faces, with feminine features, even on Tom (he just doesn't accentuate them).  I think they are possibly Curves, if you look at their intense gazes in pics below, but this is less common.

There are several youtube videos questioning whether Bill is gay.  He claims he is not, so I take him at his word.  He cannot deny being androgynous and effeminate, and somewhat taken with his own appearance.
"...effeminate males (who tend to be Allure, Dreamer, Imaginarian and Possibilitarian types..." p. 614 Recognizing People

"Some people of this type love to perform. They are also often known for their interest in, and sometimes obsession with, pop culture phenomena such as the Twilight series, Harry Potter, American Idol, and the television series “Glee.” If Indie Rock is popular amongst their peers and friends, they are prone to be into it as well. However, a contingent of this type tend to dislike anything pop culture. They become hippies, goths, punks, rebels, graffiti artists, gang members, and criminals." http://www.530012.com/portfolio/work/p2mr/fournatures.html 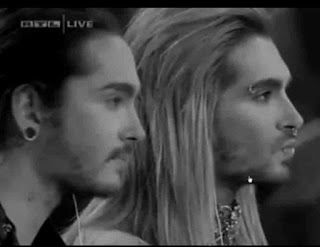