The semantics of BOLD 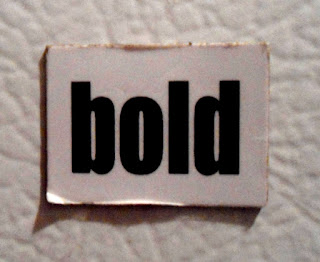 not hesitating or fearful in the face of actual or possible danger or rebuff; courageous and daring: abold hero.
2.

not hesitating to break the rules of propriety; forward; impudent: He apologized for being so bold as tospeak to the emperor.
3.

beyond the usual limits of conventional thought or action; imaginative: Einstein was a boldmathematician. a difficult problem needing a bold answer.
5.

striking or conspicuous to the eye; flashy; showy: a bold pattern.


Are all T4s bold?  This is my argument that they are not.  This is also my effort to explore the semantics of the word bold and it's many meanings related to types.

First of all, in my previous post I scanned other four type systems and found that none of them (so far) even use the word bold, and the one that did used it for T3.

I have a few of the definitions here.  First, when bold means fearless, I think most T4s are so reserved that while they will fearlessly speak their mind in a blunt way when pressed, more often they will swallow it, retreat, or wait for a better moment if they think that is strategic.  So that also covers the definition of bold as unduly forward or abrupt, which is certainly a T4 ability, but it is more repressed than it might be in a T3 for example.  Elsewhere, this is referred to as impudent or not hesitating to break the rules.  I think of T4s as more classy than that, they may feel they are above some rules, in the sense of what DYT refers to as being their own authority, but I think they generally respect authority enough to not be impudent.

If you think of bold as having a daring spirit, I also think that a T1 or T3 is more daring than a T4, at least on the surface.  If you define bold as adventurous or free, wow, I don't think that is T4, generally.

Now, when you get to bold meaning standing out prominently, what I think of is bold in contrast, which is found in a T4s features, and should be reflected in their clothing contrast.  Where I drawn the line is when striking is paired with conspicuous or flashy, while patterns warn may be bold, I don't think a T4 should really go so far as to make it the goal to be garrish or showy.

Finally, someone in my group mentioned the idea of being a bold thinker, and I do like this association with T4, but it's an internal, analytical process, not an extroverted one.

As a possible T4/2, I often default to thinking of myself as T2/4 because there's no way I'm going to pull off the amount of contrast in the purely DYT definition of T4.  Yet, in seasonal color Winter is not quite as intense.  Also, wherever my T2 is in the line up, it is probably the part of me that wants to be more subtle, even in looking at other T4s.  I supposed the T4/1s and T4/3s are possibly more at home with the flamboyance of the typical DYT BOLD.

... but hey, don't listen to me or anyone, EXPRESS YOUR TRUTH! Jane
adjectives bold semantics Type 4

Sidni said…
You are right on the money here, Jane. I also am a 4/2 combo and can't do the extreme color combinations that we see some do in DYT. it feels circusy and cheap on my body. That's not to say that someone who feels good in that shouldn't wear it. I bet though that they are secondary ones and threes, expressing that part of themselves.
June 9, 2013 at 5:42 PM