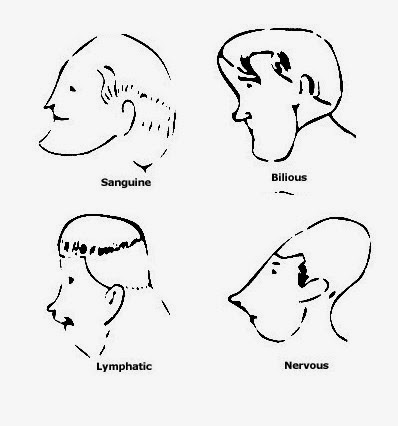 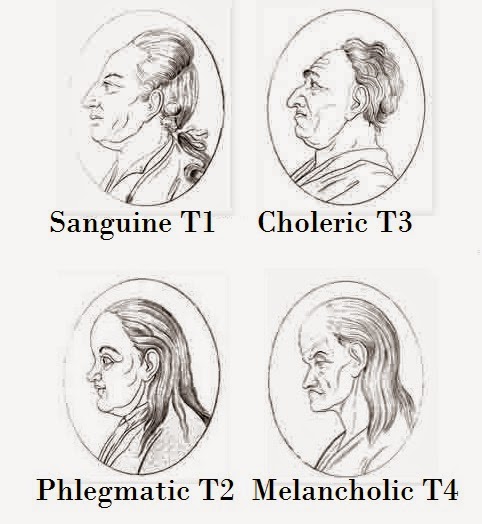 Sanguine is the same in both systems.  Is Bilious the same as Choleric?
Is Lymphatic Phlegmatic, and Nervous the Melancholic?

The bilious type is physically characterized by either a pouched or flat forehead on profile view: The mandible usually proceeds straight downward from the ear for a short distance and then runs at an oblique angle sloping downward toward the chin.

The primary characteristics associated with the bilious temperament have to do with the strong–willed nature of the type. The bilious are conquerors, dominant, often domineering, bossy, constructors; they have an active practical intelligence and make things happen. They are indefatigable, need very little sleep, and must do oxygenating activity. When their will is not catered or is thwarted, they tend to become morose and brooding. They acquire gobs of practical worldly information. They require plenty of calcium and vitamin A. They are especially prone to bone injuries, eye and ear problems, gall bladder and liver disturbances, and problems in areas of the body where there is epithelial lining.

The sanguine type has a sloping back forehead with a very large mandible that comes straight down from the ear and runs at nearly a 90° angle to the chin. In the sanguine temperament we find someone who can be defined by two words: acquisitive and territorial. The sanguine need to establish an empire and acquire as much as they can. They are optimistic by nature and extroverted. Being muscularly dominant, they are action-oriented, extolling the body. They love body building, aerobic exercise, and body contact sports. They seek to exert their actions as the situation of the immediate present dictates. They tend to be bored easily, and to have short attention spans. They don't make long-range plans. Such activities require more time to be taken than they are willing to give. They learn best by doing, and when they are not active, they literally have no thoughts swirling around. They require aesthetic surroundings and need organized activities throughout their waking day. They require vitamins C and E. They are quite vulnerable to cardiovascular problems, muscle injuries, diseases of the genitals amongst others. (The United States is basically a sanguine society. It is no wonder, then, morphologically speaking, that heart disease is the country's leading causes of disease-induced mortality.)

The nervous profile displays a bullet- or cone-shaped head with a receding chin often. The nose can be elongated and the line of the forehead slopes backward. The mandible appears to run as a sharp slanted line from the bottom of the ear directly to the chin.

Nervous types are volatile and hypercritical, and the quickest perceivers of all the types. They have high intellect and think abstractly and philosophically. They have an artistic temperament, although their productions tend to be imitative rather than innovative. They can package old ideas in new versions. They are excellent communicators, are witty, hypersensitive, and hyperreactive to the world. They tend to be hypochondriacs, often magnifying trivial injuries (and events) into dramatic events of great magnitude. They need adulation, acceptance, applause, approval from the outside world, or they become depressed. Vitamins B1 and magnesium serve them very well. They tend to suffer from ailments of the skin and nervous systems as well as the liver, and often the thyroid gland. The nervous type need to avoid prolonged or extensive aerobic exercise.
The lymphatic type has essentially no discernible jaw line, flat forehead, and often displays a receding chin.

Lymphatic types are devotional. They often have a strong religious inclination and are visionary. They can be dogmatic, authoritarian in their opinions, bombastic, and paternalistic. They seek justice, are quite companionable and tolerant, are quite organized in their thinking, and are great organizers. Like the sanguines, but unlike the bilious and nervous, they don't feel guilt.

Lymphatic types can use vitamin B6 as a diuretic. They suffer from endodermally connected organ problems that may involve the lungs, pancreas, intestinal tract, urinary bladder, to cite a few. They love to eat and must eat to live. They can consume any diet. In contrast, the nervous are vegetarians, the sanguine must have meat, and the bilious, being omnivorous, are able to eat meat, carbohydrates, grains, and vegetables.

The ideal for establishing a successful organization is to have a bilious boss, a sanguine salesperson, a lymphatic organizer, and nervous idea man⁄woman." 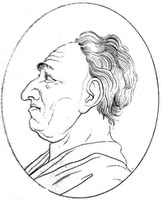 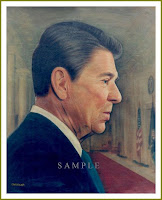 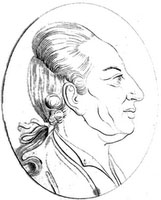 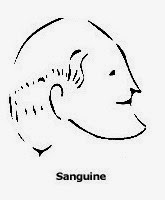 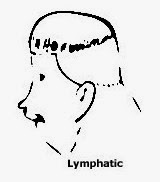 Lymphatic - George Washington (Phlegmatic)
kind, tolerant of all other types, listens to his own drummer
prefers ideas to physical activity, not an initiator,
but companionable, accepting, a great organizer 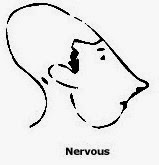 Nervous - Woody Allen  (Melancholic)
darts in and out, doesnt like being in groups for long,
tends to be reclusive, artistic in an imitative way
highly evolved intellect and great perception,
but trouble sustaining things 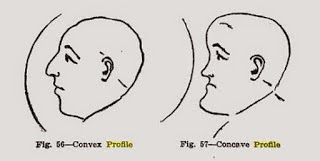