The 5 Chinese Elements and the 4 Greek Humors: a personal update

We had a very dreary, snow winter here in Oregon and as the Sun began to return with the approach of spring, I noticed that the windows in my office were rather dirty.  At first, I thought it was the outside of the window and I couldn't do anything about it.  But then, I rubbed the inner pane and realized both sides were filthy and at least I could clean my side of the window to my outside world.  And then that metaphor hit me, I can only change my part of perception as much as I am conscious.

Related to this, I had an interesting conversation with two different acupuncturists recently about the 5 Chinese Elements.  One of them was assessing me (and my pulses) and said I am highly Metal, which I suspected (from my face). The second one and I were talking about the correlation of the 5 Eastern Elements with the 4 Western Elements (or Greek Humors), which our color world associates with the 4 Seasons. (But we are also familiar with the 5 Elements in Fashion Feng Shui).

BTW, don't assume the elements line up right.  Water in 4 Humors is not the same as Water in 5 Elements! etc.  See post and post


Oh, I guess I should incorporate more metal in my outfits...
Metal/Water or Water/Metal 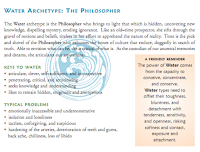 The first acupuncturist told me that I use Metal for the service of my clients, providing assistance in discernment - but not so helpful when I turn it inward on myself! The second acupuncturist told me that our dominant element is the most apparent to others - both in our amplified gifts in that element AND our amplified shadow traits.  Well, ding!

When we think of the four Greek humors which lead us to the types or seasons, during childhood our traits from our dominant humor are given the most feedback - positive and negative.  That painful negative feedback can often cause us to repress our dominant humor and we can then live in our secondary.  So now I get another aspect to this.  Our secondary doesn't have as strongly developed shadow elements!  No wonder it's accepted more.

So when we decide to live in our dominant, that's why it's so uncomforable.  When I switched from Type 2/4 to Type 4/2, or from Summer/Winter to Winter/Summer, it was a huge stretch!  (And often it is a flip like that).  I love the gifts I have as a Winter, but it is excrutiating at times to realize that my shadow is visible!  Anyone relate?

hire me: I do CMAS and Color Profiles virtual analysis
... but hey, don't listen to me, EXPRESS YOUR TRUTH! Jane
personal updates

Null said…
Hi, yes I am feeling that right now. There is an element of comfort to dressing for the inner me. I would often choose night clothes, undergarments and dishes (yes dishes!) That reflects my inner self, but then try to hide behind a costume.
July 28, 2017 at 11:37 AM