More on the Elements 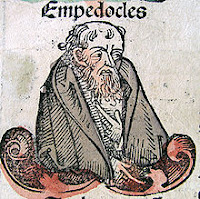 From Working with the Elements

"According to Empedocles, Fire and Air are “outwardly reaching” elements, reaching up and out, whereas Earth and Water turn inward and downward. In his view, and that of later alchemists, the elements are not only material substances but also spiritual essences."

"It was Empedocles who established four ultimate elements which make all the structures in the world - fire, air, water, earth.[28] Empedocles called these four elements "roots", which he also identified with the mythical names of Zeus, Hera, Nestis, and Aidoneus[29] (e.g., "Now hear the fourfold roots of everything: enlivening Hera, Hades, shining Zeus. And Nestis*, moistening mortal springs with tears."[30]) "  wikipedia
*Nestis is Persephone 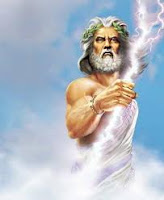 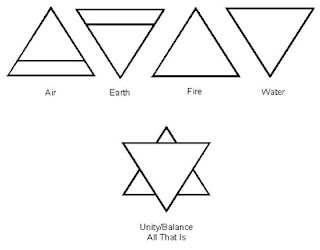 "The symbols used by the alchemists for the elements have a lot to say about their archetypal origins.


Earth is cold and dry and seeks to descend, but its dry component blocks the full descent of the Water principle, as indicated by the horizontal line in the triangle. Thus Earth is suspended in time and space and is what the alchemists would call the least volatile or most fixed of the elements."

"Jung saw the Four Elements as archetypes existing in the collective unconscious and thus present in everyone. Jung considered Fire and Air the active, masculine elements and Water and Earth the passive, feminine elements."

"To balance your dominant element (or humor) find its opposite element on the cross within the square. You want to increase the presence of this neglected element to balance your temperament, however, since they are opposite, you must work through one of the adjacent elements."

"Since we know that Carl Jung (1), one of the founders of modern psychology, studied mystical literature and alchemy, we can easily conclude that his conceptualization of intuition, sensation, thinking and feeling as the four basic archetypes or components of personality is clearly a derivation of Empedocles' ancient theories about fire, earth, air and water. Jung focused initially on the polarities of introversion (directing one's attention inward toward thoughts, feelings and awareness) and extroversion (directing one's energy outward toward people, actions and external objects), combining each polarity with predominances in thinking, feeling, sensing and intuiting, to develop eight basic personality types.

The four personality variables of the Meyers-Briggs test (and its offshoots, the Keirsey test and the DDLI) (2) also appear to be a further development of this psychological philosophy. " http://www.webwinds.com/thalassa/elemental.htm

"I just came across this test: http://www.ling.rochester.edu/~duniho/ddli/ddli341.zip and it is -by far- the best assesment test I have taken so far. If you take it please take a few minutes to send the raw test results to Dr. Fergus Duniho at this address: duniho@philosophy.rochester.edu"