July 16, 2012
Sometimes I wonder why I care so much about any of the issues on this blog.  Usually that's when I have PMS.  It also bothers me when I'm on the verge of figuring something out but it eludes me.  I'm struggling right now with how many different ways the seasons and the elements have been aligned.

Honestly, it all becomes pretty subjective when you see how many ways it can be correlated.

For example, Suzanne Caygill switched summer and winter from Johannes Itten, but not everyone agrees with her doing that.  See this article.

Angela Wright's Color Psychology flips Spring and Summer's correlated elements from Caygill, but the shapes and colors remain roughly the same, so it's not that big a deal.

Irenee Riter doesn't really talk about the seasons at all, but does mention the humors.  See History of Personality Analysis

If you look at the four humors, the seasons associated with the elements are very different altogether.  Spring is Air, as in Caygill, Summer is Fire, Autumn is Earth and Winter is Water.

The Four Elements & Humors - based on a diagram from Isidore of Seville, Liber de responsione mundi (Augsburg, 1472). Original in the Huntington Library. 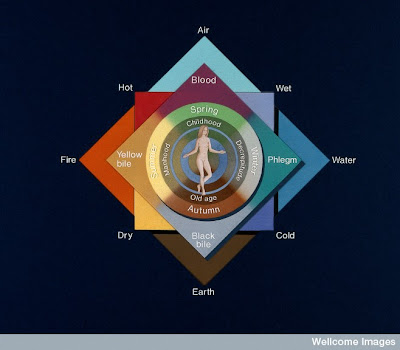 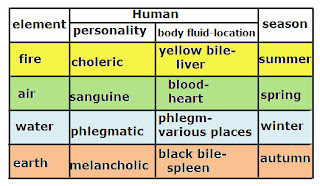 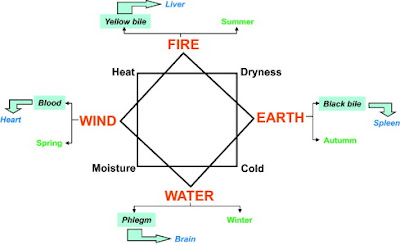 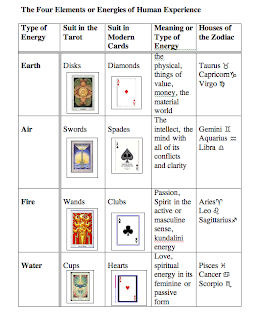 Another view of Astrology:

There are 4 elements of Astrology -- fire, water, air and earth -- and they relate respectively to the 4 psychological functions described by Carl Jung as intuition, feeling, thinking and sensation. An esoteric Tarot deck also contains four suits not including the major arcana, referred to as trumps. These suits correspond to the aforementioned elements such that Wands is symbolic of Fire, Cups of Water, Swords of Air, and Coins of Earth. These correlations are pictured below, counter-clockwise, along with the four seasons.


The Five Elements and The Five Seasons

Choosing Foods by the Macrobiotic Calendar


Shapes can be facilitated as part of the remedy. For instance, fire is of a triangular shape, earth is of square, metal is round, water is a wave-like shape, and wood is considered to be rectangular. These shapes can be used in the living space if you want to invite water. It is very prominent in Hong Kong as many restaurants would facilitate few colors, shapes and patterns to embellish their restaurants in addition to figurines and statues.